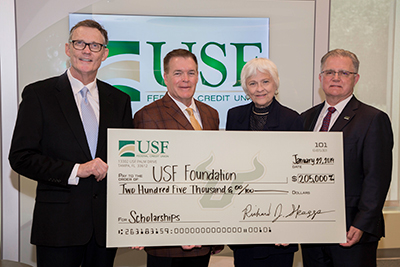 USF Federal Credit Union was named credit union of the year in the state of Florida by the League of Southeastern Credit Unions (LSCU). The honor recognizes the credit union for maintaining sound finances, caring for its members and giving back to the community.

“We are honored and proud to have received this award,” USF FCU President and CEO Richard J. Skaggs said. “Credit for this goes to our entire staff who work hard each day to help our more than 60,000 members achieve their financial goals.”

Specifically, USF FCU was cited for:

The Credit Union of the Year Award for more than $500 million in assets highlights individual credit unions that have shown outstanding achievements in areas of operations, financial strength, and member outreach, LSCU stated in its announcement.

The League of Southeastern Credit Unions & Affiliates represents 333 credit unions in Alabama, Florida and Georgia, with a combined total of more than $120 billion in assets and more than 10.3 million members. LSCU provides advocacy and regulatory information, education and training, cooperative initiatives including financial education outreach, media relations and information, and business solutions.

The Credit Union of the Year award came on the heels of USF FCU earning the Governor’s Sterling Award for performance excellence.

The Florida Governor’s Sterling Award is reserved exclusively for companies that exhibit excellence in all areas of business and workplace performance. Less than 100 organizations in Florida have earned the award since the Florida Sterling Council was created by the state legislature in 1992. USF FCU is only the second credit union to ever win the award.